From Gene to Protein

To understand how genetic mutations lead to disease, it is necessary to understand the basics on how information flows from genes to proteins.

The Central Dogma of biology:

Genes contain the information to build the proteins that operate the cell. This building process is done in 2 steps: Transcription and Translation. 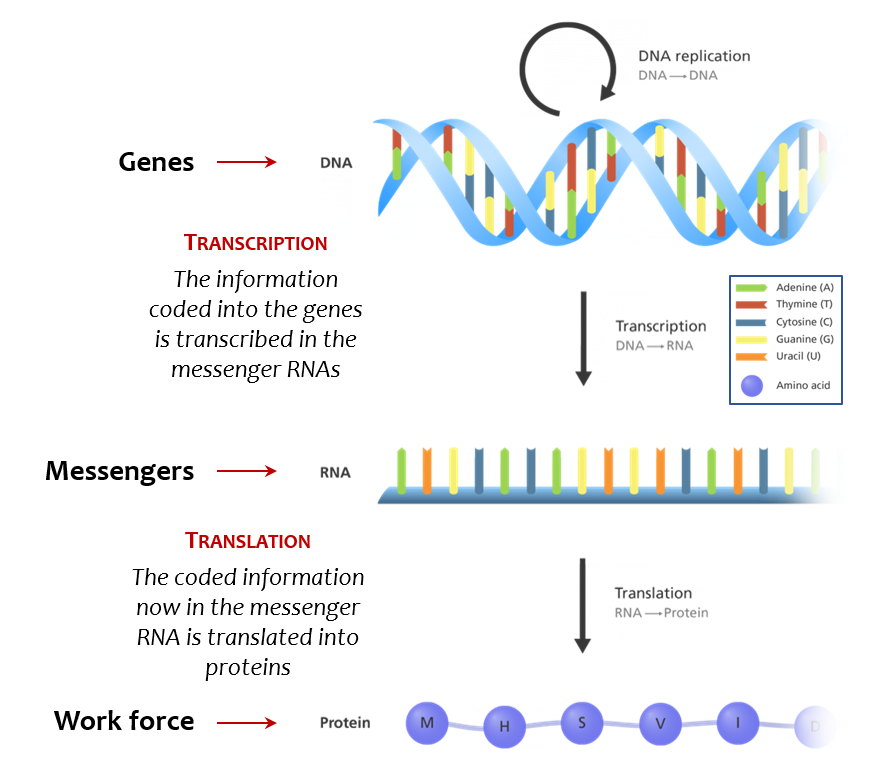 The information contained in our genome – our DNA – is written in a 4-unit code. These 4 units, as mentioned above in the drawing, are Adenine A, Thymine T, Guanine G, and Cytosine C.

A gene is a unique linear sequence of “DNA” made of these 4 units; for example, a stretch of the FKRP gene looks like this:

The information to build proteins is contained in our genes, and our genes are contained into our DNA, which can be compared to a library of information. The “messenger RNA” carried the blueprints of proteins from the “library” to the site of protein production. To faithfully carry the blueprint information around the cell, RNAs are made of a 4-unit code similar to the one found in our gene. Transcription is the process of copying the coded blueprint of proteins from the DNA/gene onto the RNA. And so, the sequence of an RNA looks strangely similar to the sequence of the gene.

While DNA (genes) and RNA (messengers) use similar codes made of 4 units (called nucleotides), proteins are built very differently. Proteins are built using 20 units called amino-acids. Translation is the process of converting the sequence of a messenger – carrying the gene’s information based on a 4-nucleotide code – into a protein sequence made of 20 amino-acids.

Mutations and the limit of the genetic code:

Because it gives our genes the ability to neutralize changes that could lead to pathogenic mutations. In the sequence above, the first and third triplets in the sequence above, “cug” and “cuc” differ by the last letter but code for the same unit of protein called “L”. However the second and third triplets, “guc” and “cuc” also differ by one letter but code for 2 different amino-acids, “V” and “L”.

It is easy to see that if, by mistake (mutation), the first triplet “cug” were to become”cuc”, the protein would still be the same because “cug” and “cuc” code for the same amino-acid “L”. This kind of mutation (called synonymous mutation)  has no consequence because of the flexibility of our coding system. In the other case, if, by mistake (mutation), the second triplet “guc” were to become”cuc”, the protein would not be the same because “guc” and “cuc” code for different amino-acids. This kind of mutation (called non-synonymous mutation)  often leads to disease.